This work was inspired by the remnants of the most famous and extensive collection of artifacts, mostly natural, in 16th c. Europe. They were amassed by Ulisse Aldrovandi (1522-1605), the first professor of natural history ever appointed in Italy, at the University of Bologna. A tiny fraction of Aldrovandi’s 18,000 items are still on display in today’s Aldrovandi Museum at the University of Bologna, but a few of the strangest pieces caused the artist to investigate the collection. Oddities, such as a frog with a lizard’s tail plastered on and fishes’ teeth inserted into the frog’s mouth, led to research that included not just Aldrovandi and his thousands of tempera paintings but the History of Museums in general. What was originally going to be a work about the fakes created for museums and natural history collections gave way to the broader topic of museology from Hellenistic Greece to the Enlightenment.

The series of ten books,contains color slides or transparencies of nine watercolors based on subjects commissioned either by Aldrovandi or by Manfredo Settala (1600-1680) for their collections of curiosities. Settala’s museum was in Milan, but his manuscripts are housed today in the Biblioteca Estense of Modena, not far from Bologna.

The research, both iconographic and textual, was boiled down to a 900-word rhyming poem that accompanies the color slides. These are hidden from view, however, when the book is placed upright and its double concertina fold extended outward. In this position, only the 11 copper-plate etchings are visible, as a wunderkammer or theater of nature, receding into the distance. The etchings, hand-drawn by the artist, are based on the earliest images of museums in Europe. They recreate prints commissioned by founders of collections of curiosities to represent the museums visually at the front of a published catalog.

An attempt was made to include the animal, vegetable and mineral world in the first version of the book(item no.47 below), but in the Magic Lantern Edition, there is no purple mica in the front cover. However, the animal world is still represented with the vellum binding. The vegetable world is more subtle. The etching paper is composed of cotton rag; however, it was dyed in boiling calendula flowers before the etchings were printed. In this way, not just a plant is represented but one with medicinal value, known as a “simple”.

While the cover lacks purple mica, it is significant for other reasons. It evokes the “magic lantern”, a proto-slide projector which the Jesuit Athanasius Kircher experimented with at the Roman College in 17th c Rome. The color images illustrating the poem are transparencies glued into the pages by hand instead of the unique watercolors of the first version. These two features connect the Magic Lantern Edition more to the history of photography and cinematography, initiated in these early museums, which were part library and part laboratory as well as collections of curiosities.

Text printed without electricity using moveable type in Centaur (a mythical beast) at Stamperia Valdonega of Verona on acid-free paper produced by Cartiere Fedrigoni. Etchings printed with the help of Manuela Candini at the Laboratorio di Sperimentazioni Grafiche Leoni-Whitman, in Bologna, a stone’s throw from Aldrovandi’s Collection. Assistance with calendula dyeing, printing and mica cutting provided by Kate Erb.

For Lucy R. Sprague
who loved the theater and
all things extraordinary

Before the Renaissance was born
curiosity was scorned
as part of human pride.
But with the new age
curiosity raged
and the cabinets opened wide.

Upon unlocking the cabinet door
all was visible,
ceiling to floor.
Every inch a wonder
at a single gaze,
a collection of oddities
arranged to amaze.

Fossils and simples
lined the walls,
mirrors on ceilings
pictured it all.
Including the viewer
within the grand scheme,
the universe presented
without a seam.

Through the tunnel-like halls
shewn the temples of knowledge,
from the Tyrolean Alps
to the Roman College.
Rows upon rows
of curios
into the infinite
perspective they go.
Layers on layers
of drawers and shelves
with a dwarf to guide us.
A wonder themselves
to pontificate for prelates,
illuminaries and scholars
with a pointer in hand
and a dainty collar.
The collectors esteemed
to awe and surprise,
to display “the world”
and all it comprised.

All was included
in an encylopedic theme,
a hall of wonders,
an impossible scheme.

No distinctions drawn,
no need to specialize.
The first public museums
were to dazzle the eyes.

The first wonder rooms
or eclectic museums
were of Hellenistic Greece,
though not in lyceums.
They did not appear
in secular spaces,
but arose in temples
or sacred places.

The oddities elencated
by Pliny and such
were grouped about
for all to touch.
Heroes’ bones
and meteorites,
natural wonders
and marvelous sights.
Animals embalmed
and ethnographic lore,
coconuts, relics,
trophies and more.

The first collections
of Renaissance fame
were formed by individuals
hungry for names.
Curiosity and study drove the lot
of scientists and nobles
who collected and bought
rarities which they
labeled and slot
in the requisite categories
everyone sought.
Nature by numbers,
connect the dots,
a coloring book
not devoid of thought.
An exercise
in eclecticism
where art and nature
suffered no schism.

A garden of Eden,
art and nature united.
Not a notion neglected
nor exception oversighted.
Nature was a text
to collect and display
which differed but barely
from Aristotle’s day.

Faces and figures
in nature abounded,
on anthropomorphic forms
collections were grounded.
Contours of saints
were found in marble
(artists completed designs
which were garbled).
Nature provided
the inspiration
(artists just finished
the decoration).

But how could such
an enormous hall
come to be filled
floor, ceiling and wall?
A collector
could not
collect it all
without a voyage
spring, summer and fall.
Voyages were often
completed in youth
after which missionaries
conveyed the truth
of material culture
in foreign lands,
of footless birds
and ankle bands,
of feather capes
and instrument seeds.
Amateur satellites
fulfilled their needs.

It was not imperative
to travel far
to find an oddity
to fill a jar.
For even that
which did not exist
was fabricated
to complete the list.
Strange fruits of the sea
presented, eagerly
by local fishmongers
aware of the hunger
for odd new creatures
to specially feature.
Charlatans often
fooled the teacher.
Pieces were found
in various ways
through miners,
falconers and
Moorish galley slaves.
Apothecaries offered
insight as well
from items displayed
which they did not sell.
Theaters of nature
in this way created
were sideshow burlesques,
hotly debated.
Yet when reason prevailed
and curiosity sated
these otherworldly objects
were soon ill-fated.

But what became
of the mandrake roots,
the magic lanterns
and lobster claw flutes?
Coral, ivory
and carved cherry pits,
virtuosities
to tickle the wits?
Though collections of wonder
were broken asunder
some vestigial pieces
outlived the species.
Descecrated, desiccated,
dusty perhaps,
yet amusing artifacts
divorced from their past.
Now revealed
as doctored frogs
with lizards’ tails
and fishes jaws
or unicorn horns
in absence of proof
fashioned from
a narwhale tooth,
or prehistoric axes
as lightning stones.
And dinosaur bits
for giants’ bones
or antelope horns
for griffin claws.
What we see now
was not what it was.

All that we know
of this marvelous show
is its documentation
row by row.
Only in lists
do the collections exist,
inventories penned
by the sleight of wrist.
Catalogs published
and prints commissioned
were eternal guarantees
of such visual missions.
A world of wonders
in one closet shut
was shattered, dissected,
divided and cut
into other collections
based upon themes
most specialized.
Of schools and museums
the collections themselves
furthered scientific learning
in providing the samples
for the truly discerning.
New philosophers profited
from the material amassed
when ignoring the precepts
explained from the past.
Though not just for science
was knowledge gained forever more
but for those places
we now frequent,
based on wall, ceiling and floor. 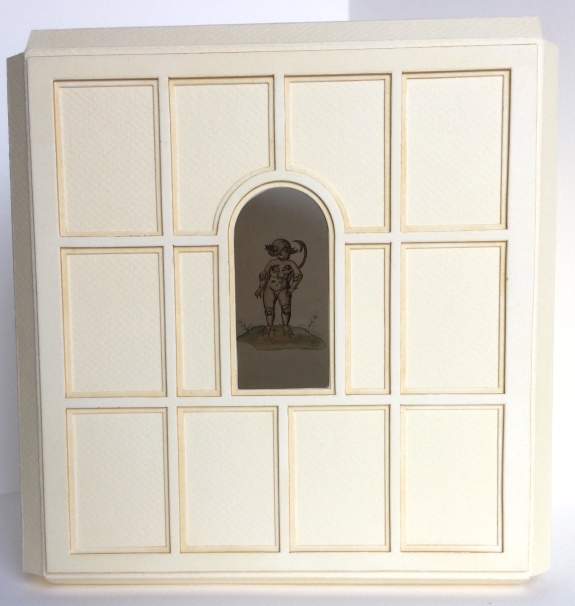 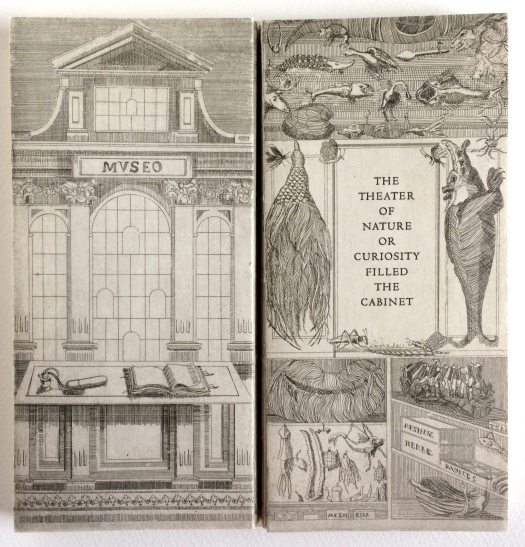 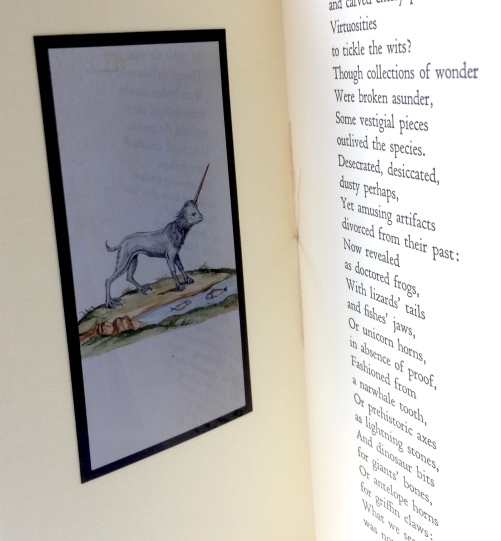 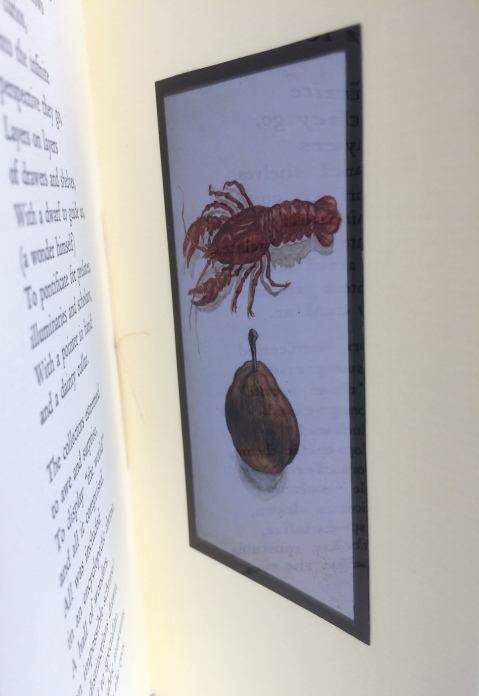