Pandora’s Hieroglyphic Primer is a poem of words and hieroglyphics colored by hand. The text is based on information from history and mythology concerning prototypes of women responsible for propagating evil in the world. This work was originally inspired by images of the snake in the garden of Eden in the Sistine Chapel and elsewhere, with the torso of a woman. It seemed curious to me that not only was Eve responsible for the downfall of “man” but the apple was offered by yet another female figure. Lilith, known under a variety of names and forms from Sumerian days onward, came well before her. And it is probably Lilith wrapped around the tree in Eden offering the apple, as she was supposedly created at the same time as Adam but refused to obey him and led an independent existence creating mostly monster-children from stolen semen. With research, I discovered that the number of negatively-depicted women was enormous, and thus I have limited my representations to a select few for the time being. Although the choice of subjects may seem lopsided in that they come mostly from Western culture, there is a reason for it. The figures from Japan, India, Africa, the Americas and Hawaii that I researched had dual natures and multi-personalities, with positive as well as negative aspects. Both respected and feared in a cyclical vision of life and death, the non-Western mythological female figures do not seem entirely evil, and to represent them solely as evil would not be true to their more complex natures. The Western figures found in Classical and Biblical sources are largely good or evil, reflecting a linear vision of life followed by death, with perhaps heaven but no afterlife. They seem, however, to be modeled on earlier archetypes which were cyclical and not wholly evil.

Pandora was familiar to me from childhood as the Greek woman who opened the box, letting evil into the world. So it seemed appropriate that Pandora’s box be the idea behind the project, which led me to the concept of the sewing basket. It is ironic that a female figure let evil out of a box, yet her descendents have been confined to it. Representations of and restrictions on women limited their choices at times, but with limitations people often become even more resourceful. With that idea in mind, I restricted myself to the materials available in a woman’s work box. Some women, from ancient Greece onward, were able to sculpt in marble and paint oils, but most were not. They were largely restricted to their homes and to the so-called “minor arts,” which were executed alone or with groups of women in seminaries and community gatherings. Within the confines of their sewing boxes they composed embroidered rhymes and imaginative designs that endure.

Silkscreened on cotton cloth in Century Schoolhouse at Edizioni Grafiche Il Navile and cut by the artist with pinking shears.

Pandora, I thought,
was first of those
Blasphemous women
creating men’s woes.
But women in kind,
from the first day of war,
Were contrived and controlled
to serve evermore.

When women offered
a hand to lend
She was often sent
to sew and mend.
Inside her basket,
safe and sane,
She avoided chastisement
of public reign.
Though caught in a cage
as the butterfly-witch,
Her touch metamorphosed life
with a stitch.

When a woman
might have wanted
to turn to stone,
she turned to cloth
and paper alone.
Marble and canvas
were not for her,
As they caused
snakey locks to stir.
But sisters not bound
by needle and thread
Even suffered attacks
after they were dead.

Ardat Lili or Lilitû,
Wicked servant of Lilû,
Also known as Lamashtû,
Lilith all are names for you.
From Sumerian walls
to Adam’s lair
Your wings and claws
plagued children there.
And following
in Scylla’s lead
You multiplied monsters
from stolen seed.

For all about Eve
that’s ever been said,
Eve was better
behaved in bed.
Lilith refused
to lay beneath,
And offered the apple
for Eve’s sweet teeth.
Eve was burdened
like all the others
For begetting more heathen
sister-mothers.

Women impure in church
could not pray
From post-partum
for sixty-six days.
After a boy,
thirty days only,
As boys were cleaner,
and therefore, less homely.

Beware of beauty,
beware of song,
A woman’s voice
will lead you wrong.
Mirrors and combs
were common possessions
For evil women
with deadly obsessions.

Salomé of beaded chest
Wrought St. John’s
eternal rest,
Not of her own
but her mother’s request,
Proving a mother
does not know best.

Courageous triumphs
in peace and war
Could not overcome
the title “Queen Whore”.
The final ruler
for the scarab beetle
Left only
a monumental needle.

Born of a dancer
and trainer of bears,
Theodora was empress
of foreign affairs.
But as any iron woman
behind a ruling mate,
She was an ill-painted harlot
manipulating fate.
Her splendor lives on
in Ravenna’s mosaic,
Though Latin descriptions
are less than prosaic.

A yellow hanky
or a little bell
Procured a woman’s
passage to Hell.
A short Roman tunic
or a red beret
signaled those
working night and day.

Saturday spies
brought Melusine’s demise.
Under every skirt
a serpent lies.
A woman is only
a snake in disguise,
To be discovered
by voyeurs’ eyes.

Curing with plants
was a telltale sign
To condemn a witch
with wicked designs.
An unschooled healer
risked surefire
of riding a mule
to the funeral pyre.

A woman’s weakness
was purely innate:
A crooked rib
did form her fate,
So unnaturally bent
away from man
That Satan woos her
to his clan.
The voracious mouth,
the bird of prey,
Feasts on marrow
and flies away.
Unsatiable woman
the wanton beast
Chooses her victims
for Sabba’s feast.

St. Joan’s threads
were blasphemy pure,
A sin she did not
long endure.
Delusional
in ecclesiastic vision,
Bearing arms not children
led to prison.

For women of letters
in the second sex,
Adultery hung
upon their necks.
Out of the home
when the worst occurred,
The woman no longer
had her word.

Autonomous women
fell out of line.
Both nuns and teachers
paid a fine.
Turning boys into girls
and girls into men,
Spinster teachers
suffered by pen.

The old maid can’t win
once the game has started.
She’s the last to be picked
and the first discarded.
An unmarried woman
with her knitting bag
Is the modern version
of the ancient “old hag”.

Delusional women,
weak yet conniving,
Seeking pleasure
or power-striving,
Deceitful with beauty,
deadly with age,
For this her counterpart
fashioned a cage.

The box is closing
and she is in it.
Will we escape it
or will we climb in it?
Creativity reigns
within these limits,
But is the tale ending
or do we begin it? 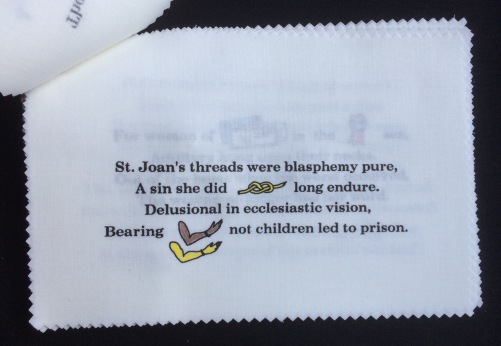 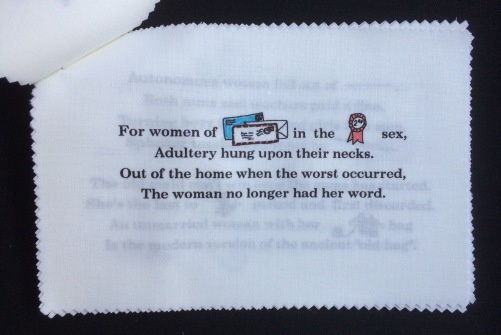 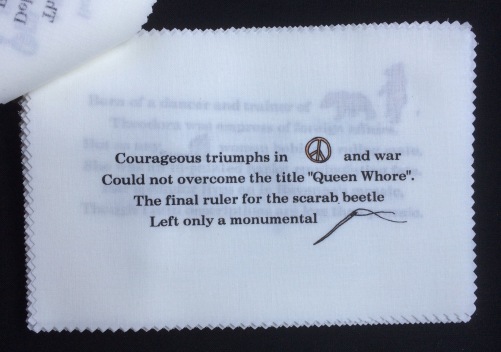